Plumtree Church is one of several ancient churches in this area. In its early days Plumtree was an important mother church whose influence spread over a considerable area, probably including villages as far away as West Leake.

Although there was almost certainly a church here in the 11th Century, before the Norman Conquest, a claim that it was founded in the 9th century cannot be confirmed. The church is mentioned in the Domesday Book (1086).

Saxon foundations were discovered when the tower wall was being rebuilt in 1906–7, and the blank arcading on the outside of the south wall of the tower is considered to date from the early 11th Century, along with parts of the doorway in the west wall.

The nave has 13th Century arcades, while the architecture of the clerestory, the south aisle and the chancel is Perpendicular, from the late 15th Century. The north aisle also originally dated from the 13th Century but was rebuilt and much enlarged in 1873, partly using stone taken from the old Trent Bridge in Nottingham.

The church was closed between 1873 and 1875 while a major redesign was carried out by George Frederick Bodley, one of the major Victorian architects, and his partner Thomas Garner. The project also involved raising the chancel arch and walls, putting in a new east window, moving the old one to the east end of the north aisle, putting new pews in the nave, removing the west gallery, reflooring the whole church, adding a new font and installing stalls for the clergy and choir in the chancel. The Rector at the time, Revd William Burnside, and his family paid for much of the work; his brother was Lord of the Manor of Plumtree.

The Bodley and Garner ceilings and screen were extensively renovated in the 1980s. The colours have been matched to those used in the 1870s. 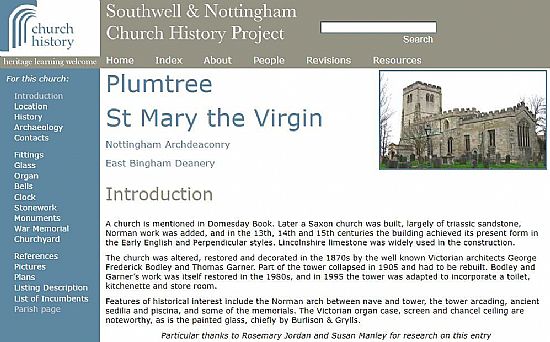 The Southwell and Nottingham Church History Project contains information on the history and architecture of Plumtree Church.  The Church History Project was set up in 1998 in conjunction with the University of Nottingham to provide an accurate historical and archaeological record for each church and church site within the Diocese. The recent award of a Heritage Lottery Grant has enabled this work to expand into both education and tourism under the heading of the Open Churches Project. 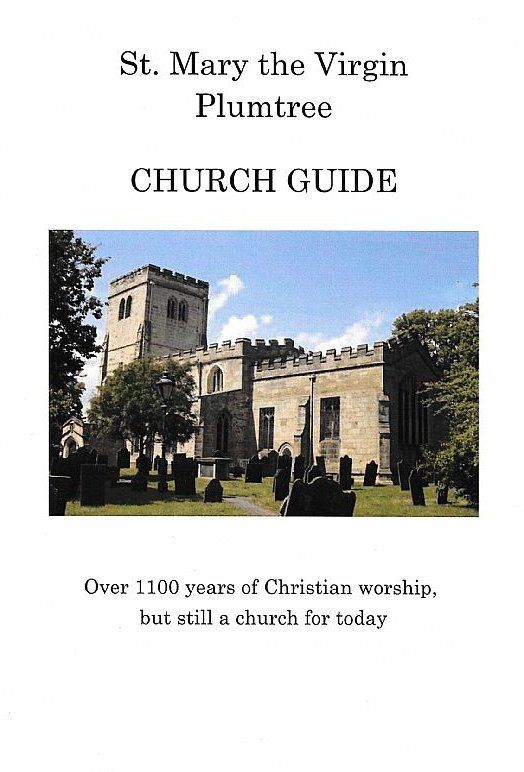 A detailed guide to the church containing colour photographs is available at the back of church, price £1.00. If you are unable to visit the church but would like a copy, please contact Rosemary Jordan.

It contains an introduction to the history of the church, including the Bodley & Garner restoration in the 1870s, followed by a tour taking in the Norman arch, the tower, children's corner, the vestry with its (then uncleaned) original panelling, the organ case, main altar and reredos, candelabra, and stained glass.

The tour continues outside the church and describes the Norman blank arcading, some important headstones and the War Memorial.

The War Memorial in St Mary's churchyard commemorates men from the parish who died in the First and Second World Wars. As part of the commemoration of the centenary of the WW1 Armistice in 1919, a series of articles was produced describing each man listed, their family, local connection and when they died. You can see these via the following link