A damp day in July provided the more adventurous of us with the opportunity to get messy at one of Paul's Fellowship Events - making, and using, natural dyes. We had some success, but it was limited by the downpour that coincided with our newly dyed cloths being hung out to dry.

Paul had spent much of the winter researching what natural ingredients could be used to dye cloth. He put out a request at one Sunday service for avocado stones (duly supplied by the score - too many people obviously eat avocado on toast) and at another for elderberries (safely frozen until needed). 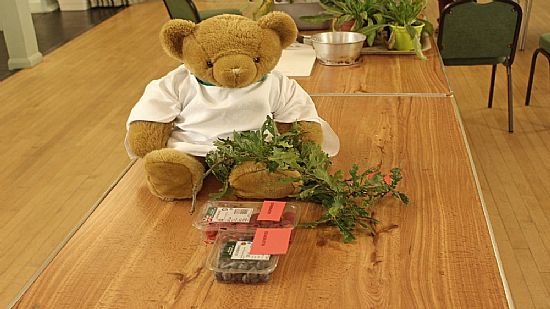 We met up at the Burnside Hall ready to go [Big Ted says: I wore a pinny fashioned for me by Auntie Fiona. It was nice and big as I really didn't want to get anything messy on my splendid fur.] We gathered all the ingredients together - Paul had brought most of them along, but there was some hands-on work required for walnuts (handy tree in the churchyard - very old lopper used for cutting them down) and stinging nettles (a handy patch also in the churchyard - gloves were provided).

After appropriate chopping, pounding and smashing of ingredients, pans of potential dye were put on the hob to boil. [Big Ted says: Don't try this at home, Woad is really pongy when it's cooking; it made my nose itch! We added rhubarb leaves to make the dye stick, but you can add wee instead!]. 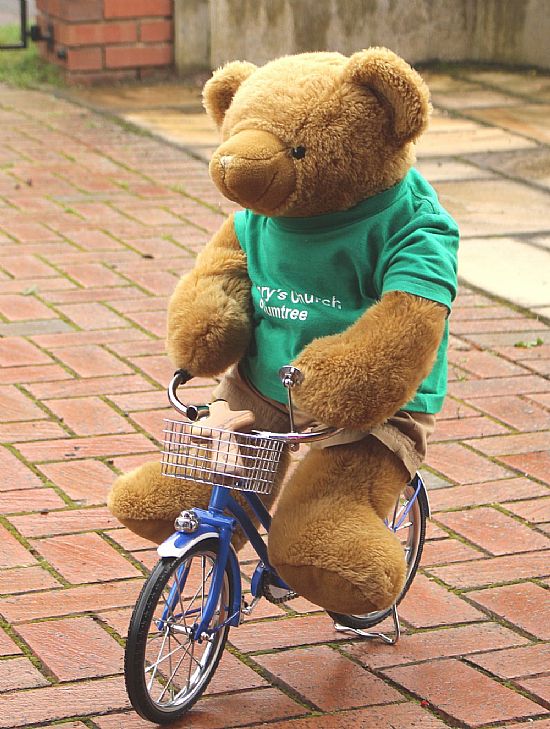 After the ingredients had boiled for a while, the pans were taken outside to cool a little and cloths were put in them to steep.

While the magic was happening outside (we hoped) we all had lunch inside. [Big Ted says: Lunch was lovely, all sorts of sandwiches, bits of pizza and hot spicy things. And then I got to play on a bicycle that Auntie Jackie had brought along - she was a bit vague about how she had a bicycle for a bear! It was just the right size for me. I think I'll use it for the Ride & Stride in September. I'll have to get into training first though].

We hung up the cloths on a newly fashioned clothes line (great knots, Paul) hoping that they would dry overnight. Except that night we had the heaviest rain for a few weeks and sadly most of the cloths turned (almost) white again - except for the ones dyed in turmeric, which turned sticky!

Ingredients:
Woad - a plant of the cabbage family used to produce a blue dye. Can be invasive if allowed to seed. Very smelly when cooked.

Ingredients:
Turmeric - very effective as a yellow dye as anyone who tries to wash up after making a curry knows.

Ingredients:
Dock - a huge plant, the roots are scrubbed, chopped and boiled for dye

Ingredients:
Elderberries and Beetroot - a lovely red colour, well-known by cooks for staining their wooden spoons

Ingredients:
Nettles - freshly gathered and carefully chopped they were boiled up before being liquidised in Paul's best liquidiser (only joking)

Ingredients:
Walnuts - after being given a good thwack with a mallet, these were boiled complete with their skins

Ingredients:
Rhubarb Leaves - although poisonous, the oxalic acid contained in the leaves is used as a fixative for dyes (and more "user friendly" than wee).

Cooking:
Everything was put into pans, rhubarb leaves added for their oxalic acid, and brought to the boil. Then...

Cooking:
...the resulting liquids were put safely outside in case of splashing...

Dyeing?
...and pieces of white cloth were added to each pan to soak up the dye.

Waiting:
While waiting for the dye to fix, Paul showed how to make natural "ink"...

Drying:
The cloths were drying a bit by now. I don't think nettle dye is particularly effective - other than in leaving bits of nettle on the cloth

Drying:
The dyed cloths hanging on a newly erected clothesline at the Hall.

We all had a fabulous time - despite the weather - and admired Paul's hard work in researching and testing all the natural dyes. Maybe we should have boiled things for longer to get the best effect, but as Big Ted said in his inimitable way: "It was getting a bit pongy".

PS If you want to know any of the recipes used, please contact Paul!